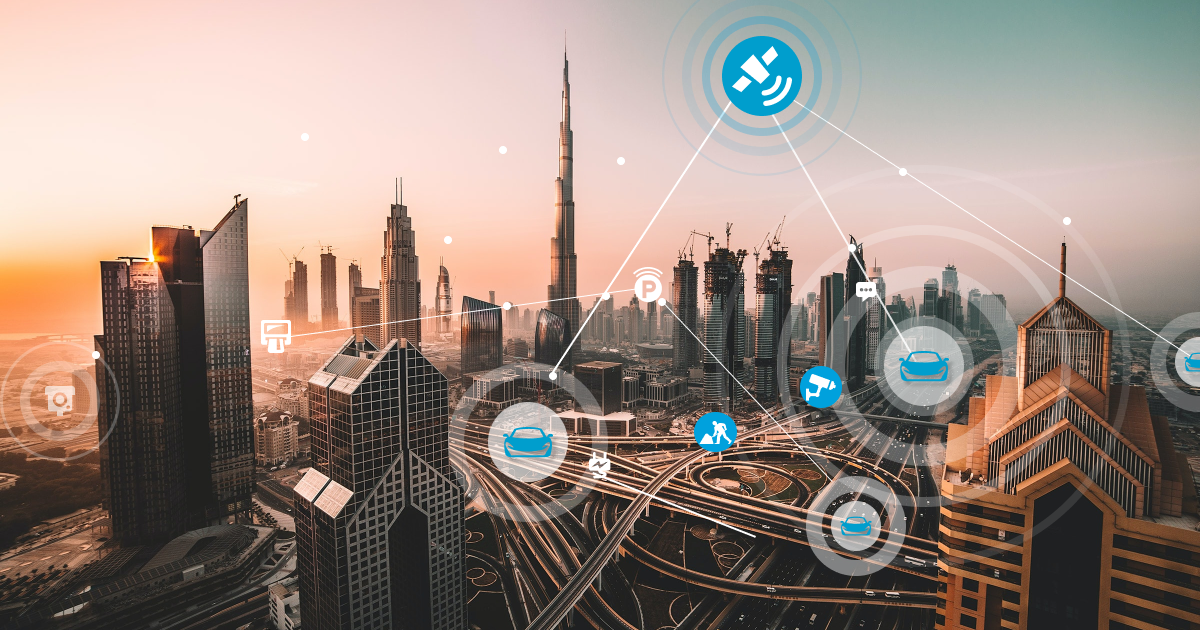 The smart city initiatives aim to optimize a city's public services and the general public's living through a series of technology-driven services.

When referred to smart city projects worldwide, the term often symbolizes offering citizens various digitalized one-stop-shop access to all government services. Such smart city projects typically include centralized online access to government, business, and health-related services. Handling and innovation in public transport by introducing sustainable and environmentally friendly means of digitalized public transport is another widespread aspect of smart city solutions. For example, Dubai's Smart Dubai initiative aims to be a paperless city by 2022, offers smart unified rechargeable cards for paying for all transport services, and offers citizens a series of government-led applications to facilitate everyday living. For example, the DubaiNow app allows citizens access to over 120 government and private sector services; DubaiPay is a government-operated payment gateway for electronic payments, UAEPass as a secure form of identification, etc.

The main focus of smart cities is on easing everyday life by facilitating access to information and services.

The key is in leveraging the connected car data to provide real-time and historical insights into commuting patterns. By truly understanding and knowing how the city moves throughout the day, city governments can ease the general public’s transport issues and improve the general public’s safety and happiness while reducing the negative environmental impact and the lost productivity costs due to time spent in traffic delays.

Another important aspect of connected car data is noticing and addressing the traffic patterns immediately as they occur. With new car sales plummeting year by year, more and more citizens are turning to the new aspects of mobility and transportation, especially towards Mobility as a Service (MaaS). Consumers slowly turn to on-demand car-sharing services, making the previously well-known traffic patterns more and more unpredictable. Disruptive global events, such as pandemic events, have erratic effects on mobility and transport, and it’s more important than ever to have at-hand real-time traffic patterns insights.

The market has recognized these needs, and during the past few years, vehicle data hubs have started emerging, and now they're offering valuable connected car data to interested parties. However, although data storage has never been more affordable, the analytics of these silos of connected car data has never been more challenging. From the technological aspect, connected car data is extremely hard to handle at a scale. Vehicles typically drive in clusters of place and time - the traffic is denser in urban areas and less frequent during nighttime, generating highly skewed data. The skewness of data is what's making it practically impossible to derive any data using conventional database solutions. Even at low volumes of data, the time-performance of today's Big Data tools degrades to unusability. The raw data is there, but the analytics is impossible, especially in real-time.

As a technological enabler, Mireo, with its unique SpaceTime Analytics Platform, bypasses the gap between the available connected cars' data and the interested parties desiring to leverage the vast amount of valuable data at a reasonable cost of ownership.

How to facilitate the connected car data in cities’ everyday life? How can smart cities address the burning issues?

The typical approach employs connected traffic cameras throughout the city that collect and analyze the volume of vehicles. The centralized system then appropriately controls the traffic lights to lower the congestion and eventually broadcasts traffic information to the motorists using smart displays.

The value of traffic cameras is limited to their placement, and due to maintenance and required supporting infrastructure, comes at a high cost of ownership.

Connected car data, on the other side, provides an enhanced set of traffic-related data. Analyzing the connected cars’ traffic data using technologies such as SpaceTime Analytics delivers real-time insights at an unprecedented speed. Combined with the integrated road network data, it enables authorities to determine alternative routes and broadcast the information to the motorists.

The traffic speed effect on air pollution is double-natured. The WHO ranks both air and noise pollution as the most significant environmental threats to public health.

The relationship between speed and CO2 emission is not perfectly linear, but actually a parabolically shaped cure with a minimum at 72-80 km/h speeds. The CO2 emission drastically increases equally at low and high driving speeds, indicating the need to eliminate driving at extremely low and high speeds.

By leveraging tools that can measure the travel speeds continuously, either in real-time or historically, authorities are for the first time able to set up an accurate set of KPIs for measuring the effect of traffic mitigation regulations on air pollution.

One approach to increasing traveling speeds is as simple as increasing the posted speed limits. Due to speed-related negative safety impacts, the authorities are, naturally, extremely hesitant to increasing posted speed limits. However, an in-depth analysis of the correlation between historical traffic accidents data and the historical average traveling speeds will eliminate the uncertainty and fear of introducing such changes. The strong backing of the data is what removes the concern and brings public support for such decisions. This article presents how to deliver an in-depth analysis of travel speeds on road segments.

According to the NHTSA data, speeding has been involved in one-third of all vehicle fatalities for more than two decades. Speeding is recognized to increase the risk of a collision, as well as the severity of injuries.

For many years, city authorities have been struggling with increasing road safety through educational, corrective, and penalty measures in order to incentivize motorists to obey the posted speed limits.

How can the city governments regain the authority and incentivize motorists to obey the speed limits?

An abundance of work was undertaken to address why people speed and disobey posted speed limits. The somewhat controversial opinion is that the root cause of speeding in most places is a fundamental disconnect between design speed and posted speed limits. On some roads, drivers naturally, of their own accord, respect the speed limits, while on other roads, speeding is more a rule than an exception.

One approach is to review the credibility of posted speed limits on controversial road segments to determine whether the disconnect between design speed and posted speed limits exists. If most motorists drive significantly above the speed limits, and the correlation with traffic accidents doesn't exist, it should be safe to increase speed limits and thus incentivize motorists to drive in a safe-speed range.

Scrutinizing the posted speed limits article demonstrates how to, using Mireo SpaceTime Analytics, quickly analyze historical speeding patterns of controversial road segments and determine whether the majority of drivers respect the speed limits or not. 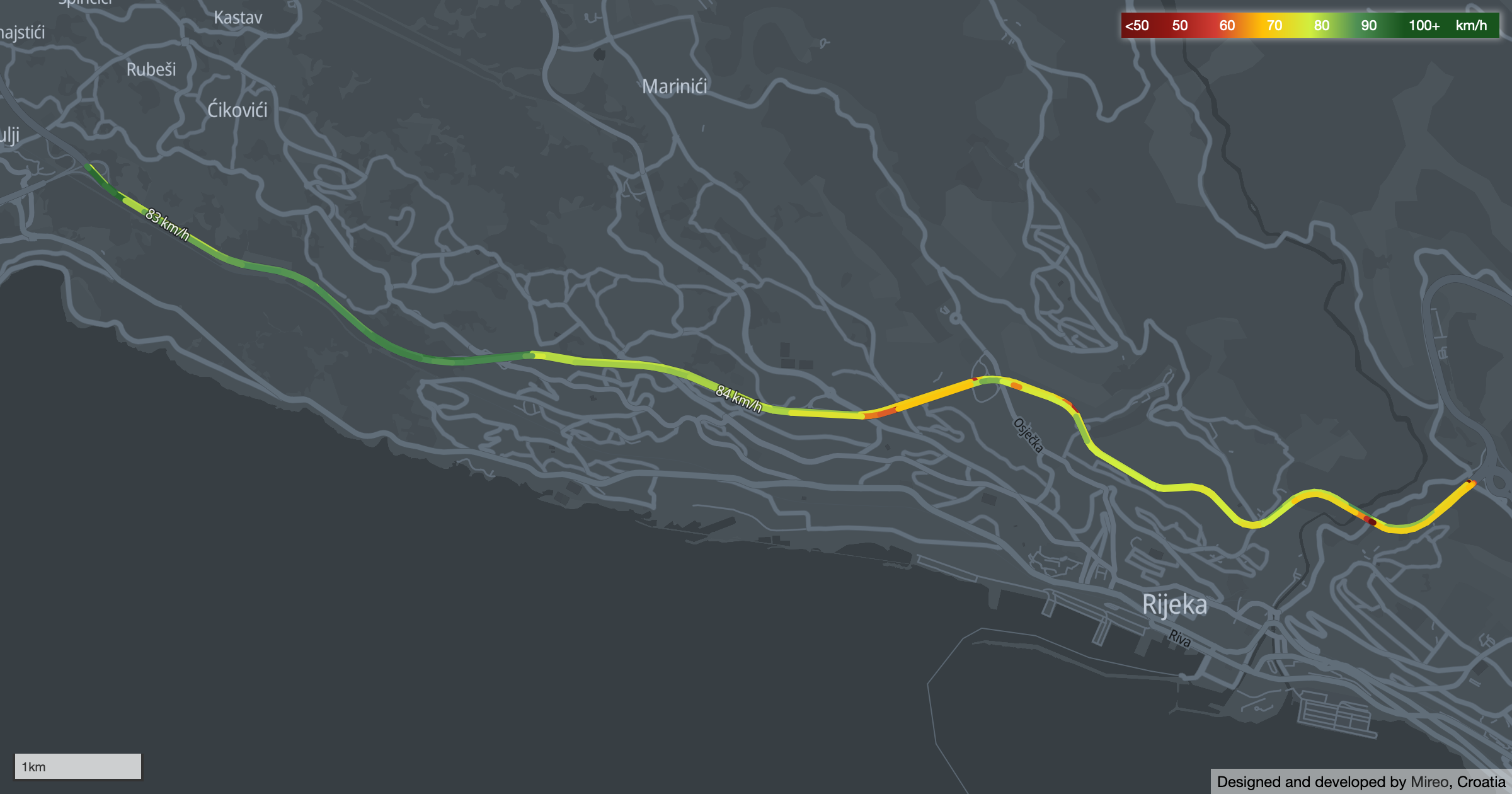 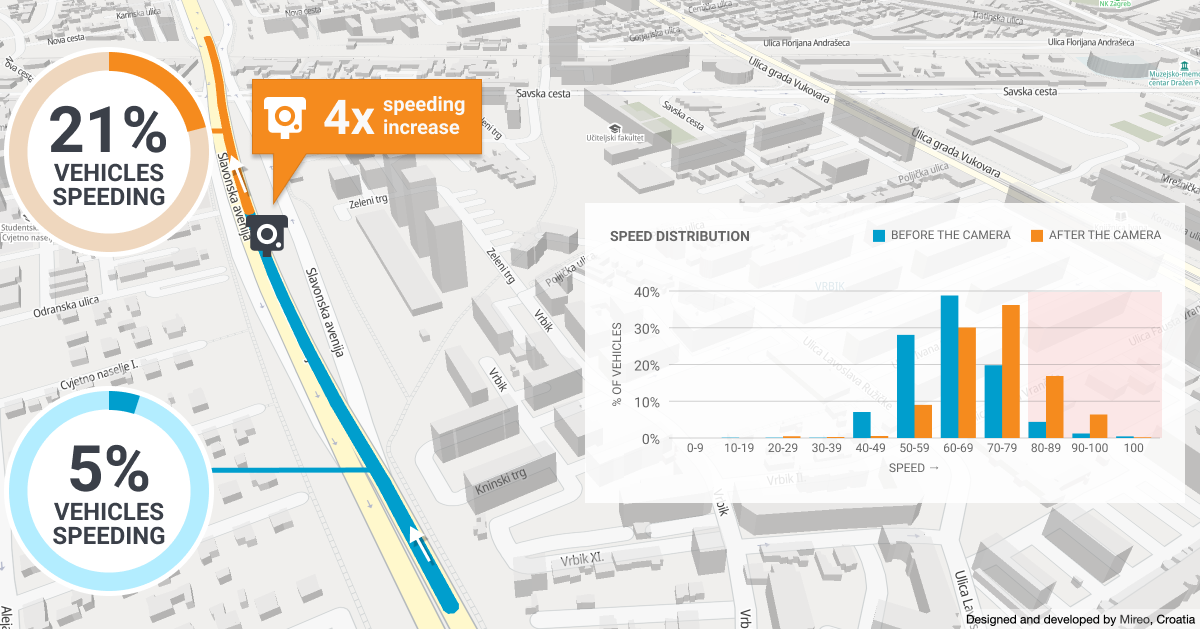 Speed camera review - measuring the speeding before and after the camera

The added value of such advanced analytical tools is a retrograde analysis of previously introduced safety measures onto speeding patterns.

Interactive map of the severe speeding hotspots in Zagreb City

Complete understanding of everyday commuting patterns is crucial in all aspects of urban planning and the construction of new roads. Even rumors of building new roads or bridges result in high public debates and scrutinization. Non-biased, data-driven decisions unequivocally show whether new roads could solve the existing issues but bring the general public's support and consent.

Does Zagreb need another Sava bridge article demonstrates how SpaceTime Analytics examines traffic patterns across city bridges in order to detect which city parts and to which extend would benefit the most from building a new bridge. 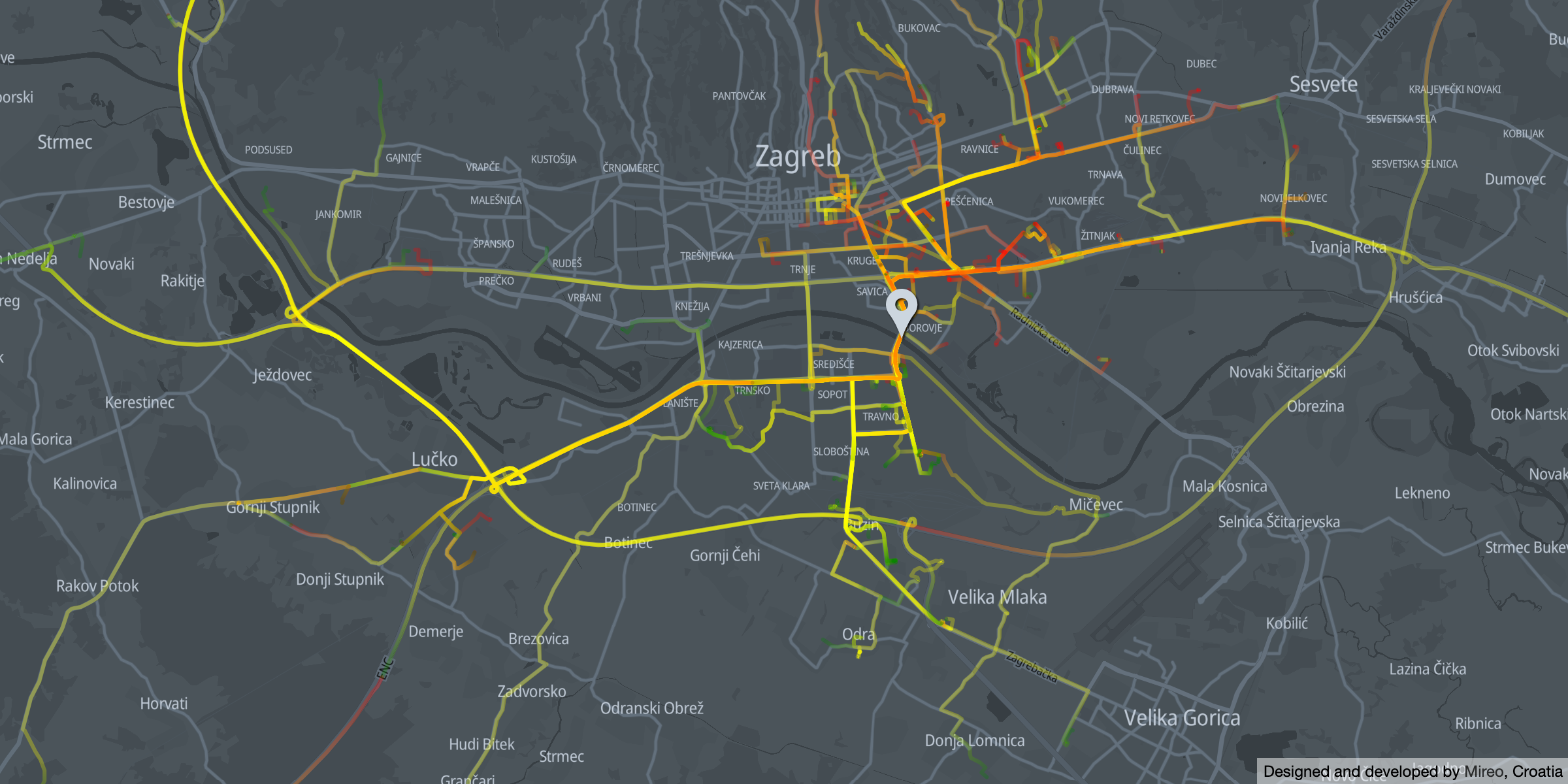 The true smart cities of the future will be the ones pioneering extracting the value from the data in enhancing living conditions and taking care of the environment, all at a reasonable cost of ownership. By leveraging tools that analyze various traffic patterns and through a series of digitalized services, city authorities will improve the quality of life and mobility.

Here at Mireo, we've been tackling these aspects successfully for some time now. As a technological enabler, our SpaceTime Analytics Platform bypasses the gap between the connected car's data (or any moving IoT data) and parties interested in extracting such valuable data.

If you would love to see the numerous, on-the-fly calculated analytics on more than 200.000 vehicles, check out our free SpaceTime online demo.